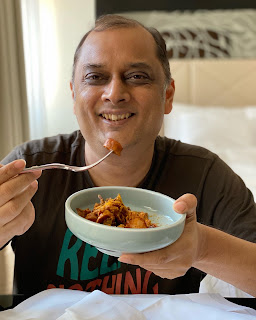 This might seem funny but taking a break, even when it’s handed to you on a platter and with lots of love, is not as easy as it seems.

I am in our hotel room having a ‘Berlin style curry sausage.’ In Berlin.

I’d read three books which featured Berlin – All The Light We Cannot See, The Passenger & The Communist’s Daughter – earlier this year when I was down with back pain, then Covid and then Herpes. The  first two set during the Second World War and the third during the Cold War

That’s possibly what made me suggest Berlin as an option when K proposed doing a holiday in Europe once she was done with the Cannes Festival.

The herpes pain didn’t lower its intensity and & showed no signs of lessening. I was not confident of going on a holiday as I was coming from a place of pain.

My therapist pointed out that the planned holiday was due two months later and that I have in the past recovered from seemingly never-ending pains. As I would this time.

I decided to go ahead with the plan even though not fully convinced about it. I was not happy about leaving our cats behind though we are lucky enough to have my mother in law and neighbours to take care of them.

I dragged things at my end in terms of confirming tickets and travel dates and visa applications. K had to book hers and did so. When I finally went to apply for a Schengen visa, which takes a fortnight usually, I was stumped as it seemed that India was facing a visa drought with no EU country even offering an  application window.

I was resigned to the reality but not K, who really wanted us to have the break. She planned and pursued our journey to Berlin with the combined determination of Churchill, Roosevelt & Stalin. Moving heaven and earth. Aided by her allies. Colleagues at work who helped to get me an appointment. Our fellow Buddhists who joined us in prayer. Suddenly a window opened through France. I not only got a visa, but a three year one at that! We reached Berlin today after spending a few idyllic days in Paris.

It still feels unreal! I so needed this trip. Didn’t realise this then.

Thanks K for making it happen and in such style! And to all who helped. It takes a lot to work so hard for the happiness of someone you bare know.