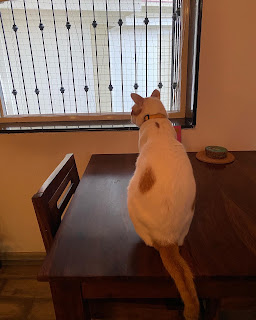 It’s the nature of heavy rains to carry old memories in their wake and that’s what happened this morning.

The skies were coming down and I tweeted something to the effect of: ‘It’s pouring in Mumbai. I hope people learn from work from home experiences of the last 2 years and don’t force folks to come to work when it can be done remotely.’

The tweet hit home, with many sharing it and responding to it. Someone then spoke of kids missing rainy day holidays because of online classes and how that was just sad.

This reminded me of a rainy morning in Calcutta in 1993. I was in first year of college. Not a kid anymore! It was raining heavily but I took the bus and headed out to college. I am not sure if this was because I was bored at home and wanted to hang with my friends. Or because I had a random unstated crush. I doubt if I would braved such a tumultuous downpour to just attend class!

The bus stopped at Rabindra Sadan instead of Esplanade from where I used to change buses to go to Central Avenue and then cross through the School of Tropical Medicine (which remained high and dry in the rains) to reach Presidency College.

The roads were waterlogged. The bus had raised the white flag and surrendered to the rain gods. One could neither go to college. Nor go back home.

I was close to the Nandan Cinema Hall. A new movie had just released. ‘The Scent of a Woman,’ starring Al Pacino. No one had seen it yet and I had no idea how it would be. The theatre was functioning and it made sense to go in and watch the movie. The tickets at Nandan were subsidised and the ground floor had some very cheap tickets for a theatre showing foreign films.

One had to walk through the courtyard to buy tickets as the ticket counter was not located next to the theatre if I remember right. The stretch was flooded. My jeans were soaked by the time I sat down in the theatre which was known for its powerful aircon.

By English movie standards the film was long. 150 odd minutes. They did not have an internal at Nandan as that ‘interferes with the movie watching experience.’ I watched the movie engrossed. Oblivious to my rain soaked jeans and the mouse running up and down my tummy. That’s how powerful the story and the acting were. I have watched it many times since.

People lament about the lack of attention spans of today’s audience and how that makes it tough for writers. Perhaps we need to make content that’s compelling enough instead of blaming the viewer/ reader? 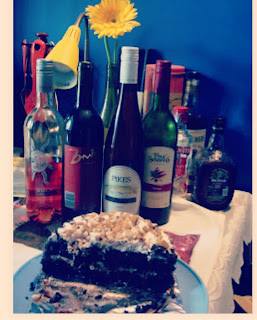 There’s a postscript to the Scent of a Woman story that fellow fans would get.

Jack Daniels is something we kept at home in Bandra when we finally had an apartment large enough to invite friends over. Till we switched to single malts and then Jameson.

We rarely drink now. We don’t entertain at home too often and most of whom we invite don’t drink. Which is why we didn’t stop at the Duty Free to pick up John this time.

Sorry to let you down colonel. 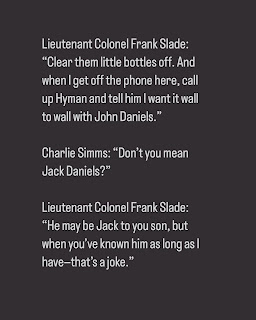