Narkel Naru is one of those quintessential sweets, which a Bengali any place in the world, would swear by. In simple terms, its ladoo made with coconut and jaggery, but Bengal style. Winters in the eastern part of India also mean the season of ‘nolen gur or jhola gur’ which is the date palm jaggery. So, a classic recipe of Gurer Narkel Naru would essentially be made of this jaggery variety. Although, if you reside in any other parts of the country, you can use the regular jaggery too. 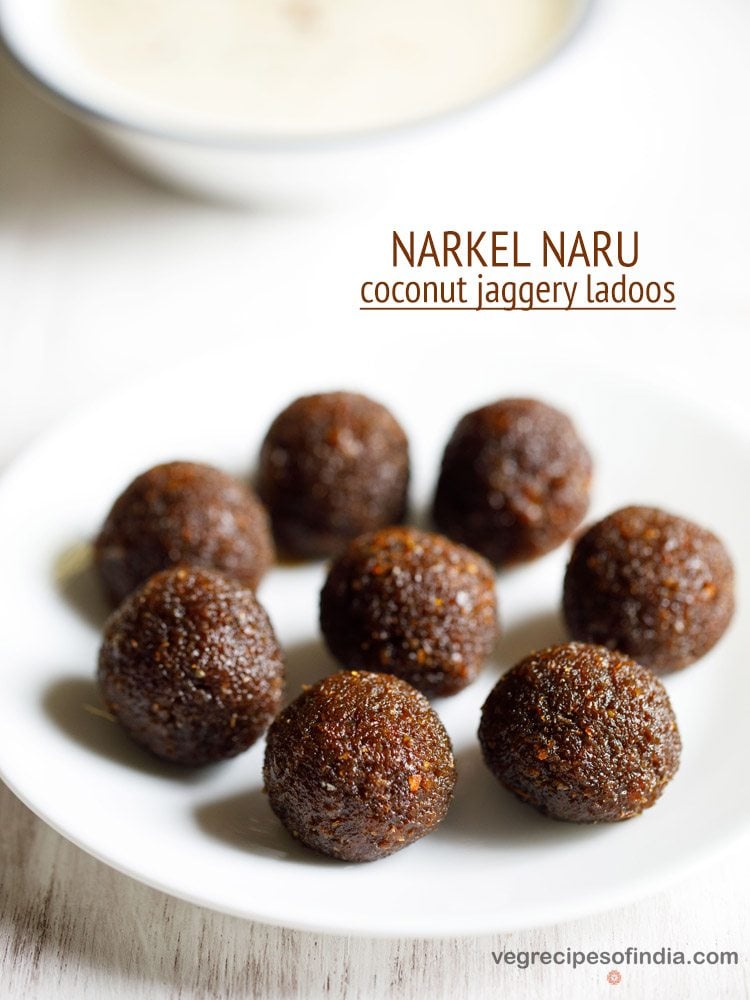 What is Gurer Narkel Naru

Since the name of the dish is in Bengali language, the words when translated to English mean the following:

Gurer – of jaggery (the Bengali suffix -er means ‘of’)

So, when put together the dish name literally means ladoo made with jaggery and coconut. The main ingredients of recipe are these 3 ingredients and it is pretty much the same across the Bengali food culture.

However, individual households or special sweet shops may claim having their secret recipes with the addition of extra flavorings or the use of a different variety of jaggery (gur).

Some people or mithaiwalas (Indian sweet sellers) may also use sugar instead of jaggery, and add khoya/mawa (evaporated milk solids) as well in their recipes. But, if you ask me, these are nothing close to the original dark brownish Gurer Narkel Naru. The ones made with sugar are called Chinir Narkel Naru or Sada Naru.

While this delight is apt for any religious festival, Bengalis can’t imagine their Durga Puja or Lakshmi Puja without the Narkel Naru. It is also perfect during festive celebrations as the recipe is simple as well as gets done within minutes. So, even if you are making a large batch, you’re not going to take a lot of time.

More on this Narkel Naru

I have said it before and saying it again that these coconut ladoo with jaggery are the simplest and easiest ladoo one can cake. Plus, they taste literally divine.

The first time I made Narkel Naru was to offer Lord Ganesha as the naivedyam during Ganesh Chaturthi festival. Since then, I pretty much stick to these for any religious and festive occasion.

In this recipe of Gurer Narkel Naru, I have used organic jaggery. So, I did not have to make a syrup and filter it before adding. If you are using regular sugarcane or palm jaggery, make a syrup of it with very little water and strain the syrup to remove impurities. It is only then fit to be added to the coconut.

One of the non-Bengali variations of the Narkel Naru are these Nariyal Ke Laddu. Though both are made with coconut as the prime ingredient, the basic nariyal ladoo also have other ingredients added to it. For instance, you can make it in 3 ways.

All these recipes are quite instant and you can make the coconut ladoos quickly by following these methods. The one thing that’s common between the Gurer Narkel Naru and these is that all of them are super duper delish.

How to make Narkel Naru

2. Stirring often, roast the coconut for 4 to 5 minutes.

3. Do not brown the coconut. The roasting is just to get rid of some moisture from the coconut.

5. Mix it very well with the coconut.

6. Stirring non-stop, cook the coconut-jaggery mixture for about 6 to 7 minutes.

7. The jaggery will melt and the mixture will slightly thicken. Do not cook too much as then the ladoos can become hard.

To test – take a small portion and let it cool down a bit. Then, try to form a tiny ladoo with it. If the mixture can be easily shaped into a tiny ball, the ladoo mixture is ready.

Switch off the heat and keep the kadai on the kitchen countertop.

9. Mix very well and let this mixture cool down completely.

10. Spread a bit of ghee on your palms and taking small to medium size portions, make neat balls. Instead of ghee you can also use coconut oil.

Store them in an air-tight container and refrigerate. Depending on the color of jaggery, the color of ladoo will vary from light brown to dark brown. This recipe makes about 10 ladoo.

11. Offer Narkel Naru as a naivedyam to the deities or serve to your family. 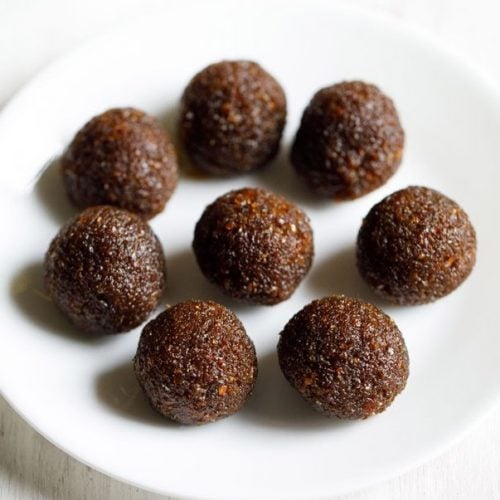 Narkel Naru is a traditional sweet ladoo made with jaggery and coconut from the Bengali cuisine. These rustic ladoo can be sweetened with date palm jaggery or regular sugarcane jaggery or sugar.

This Narkel Naru recipe post from the archives first published in September 2017 has been republished and updated on 12 July 2022.