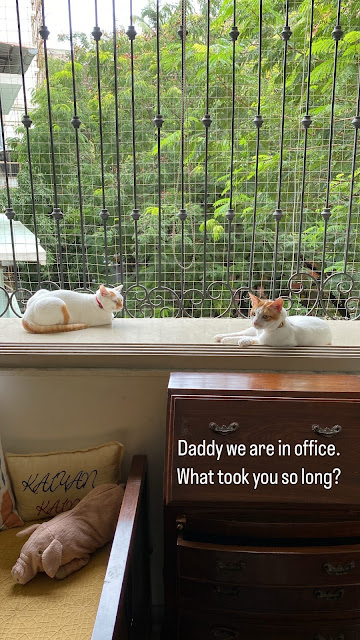 This post was written on 5th August. It’s sunny today though it was raining at 6 when Loaf woke me to pat him on bed and till at least 7 as he woke me at 6.45 for more pats. Perhaps because the rain bothered him.

I came to my office this morning and saw Baby Loaf and little Nimki, our cats, waiting for me by the window in front of my desk. My ‘office’, as I refer to it to our house-helps so that they do not think that bhabi is the only one who works in the house (which is true actually), is my study. It is also our guest room. And the ‘mothers’ room’ where my mom in law and my mom stay when they visit us. It is Baby Loaf’s room. He had made this his own ever since we took him into our house. It’s also the ‘boys’ room,’ from the early days of the pandemic when K had a stomach upset and our GP told her to quarantine herself and Loaf, Nimki and I slept in this room while she was in the bedroom till the test results came.

I do a fair bit of work on my phone these days and for that I could be anywhere in the house. Even in bed! But it only feels like ‘work’ when I am at my desk, keying into my laptop. I am old fashioned that way.

This story began to take shape in my head after I woke up, chanted, had breakfast, showered,  cranked myself an espresso and brought it to the room. Hoping to click a frame of my table, the cup and the two boys once I saw them on the window sill. As luck would have it, and rather predictably, Baby Loaf and my frame was gone by the time I walked in with my espresso cup. He is like a teen when it comes to being clicked. I did try to entice Loaf to come back with some treats but given that I used the same strategy to lure him into a bag a couple of days back for a vet visit, I had no success. Their doc told us that cats reach puberty at 6 months. K and I are both like Parsi and Bengali mothers with regards to our boys. They will always remain our babies. And we doubt if little Nimki will ever be a grown up. He is 2 years and two months old.

Coming back to my photo shoot, little Nimki obliged. He is always game to be clicked. I began sharing my blog post from yesterday when it started to rain. It was around 1. K had just returned from a breakfast with a former colleague of hers. I consciously stopped typing and decided to look up from my desk and enjoy the rain. I called K to join me. Nimki ran to her, got his cuddles from her, and then hid behind my chair.

“He thinks that if he hides behind daddy’s chair then he won’t get wet,” said K with a smile.

Baby Loaf came to the door, peeped into the study, and then went to bedroom to settle under the bed. He is not fond of the rains either. At such times my mind always go to the Kitty Blinders. My community cat friends at Almeida. Hopefully they are high and dry.

K and I chatted for a bit and she told me about how her friend, a non-cat person, made a furry friend during the pandemic when a cat walked into his house in Nairobi. The cat was an inside outside cat and would sit by him while he worked. His wife was away at that point and he said that it was as if the cat had come in with the purpose of seeing him through the pandemic till he was back with his wife.

“Just as you had said Maharani has come into my life with the purpose of fixing my back.”

Maharani is what I used to call Baby Loaf when he was an inside outside cat. He had come home one evening and lay down in the passage that opens into our drawing room. I sat on my haunches and patted him.

This was December 2019. Years of suffering of back pain had made me wary of bending down, sitting on the floor, or on my haunches. From what I understood from my doctors, bending down would be hara kiri for me.

Yet, I did so to pat Maharani without a second thought which led to K’s saying what she did when I called her to photograph us. 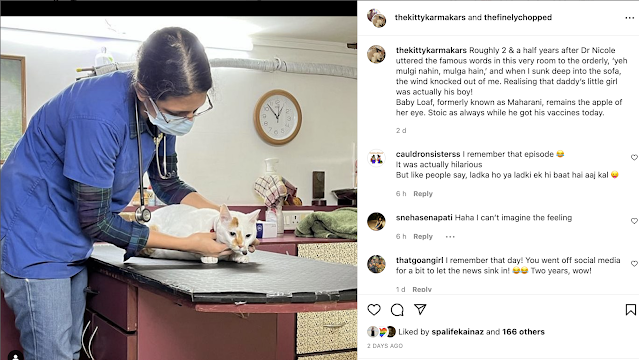 Maharani moved in with us in February. A month later we learnt from his vet Dr Nicole, who adores him, that he is a ‘mulga’ a boy and not a mulgi. Maharani became Baby Loaf. A month later K, him and I all became ‘inside cats and hoomans’ as the pandemic lockdowns started.

My back pain surfaced and I did physiotherapy and I did yoga. In both cases I was actually urged to bend down. To break the phobia that had formed in my head.

Baby Loaf would observe me when my physio was on or when I did yoga. When I was in pain he would sit beside me. Little Nimki of course is always beside either me or K. Loaf likes his space, but if either K or I are in pain or unwell, then he comes and quietly snuggles beside us.

Then he developed this quirk where he would flop on the floor, expecting to be patted. I would pat him. Tentatively. He would do this even at times when my back would be paining badly.

Loaf would lie unmoved and soon my heart would melt and I would squat and pat him, pain be damned.

“You are making daddy do physiotherapy?” I would ask him with an indulgent smile, ignoring the pain I was in.

Yesterday he came to my study after lunch and flopped. I squatted and patted him. Then suddenly decided to call K. I wanted her to click this moment so that I could write this story and thankfully Loaf obliged by not getting up till she did. It struck me that Loaf often flops these days and that I often sit and pat him and, I don’t want to jinx this, but my back has been largely fine. Recently I bumped into a fellow Soka Buddhist and friend who asked me about my back as he knew how much I had suffered and had been telling me for years not to give up and that to have faith that my back would be better.

He was so right. I looked blankly for a moment when he asked me about my back. Wondering what he was talking off! To think that till a few months back, all my conversations with people was around my back. ‘Stop doing that,’ advised Namita ji of the Sivananda Yoga Institute in the online yoga for back therapy course once. “That cannot be your identity.’ 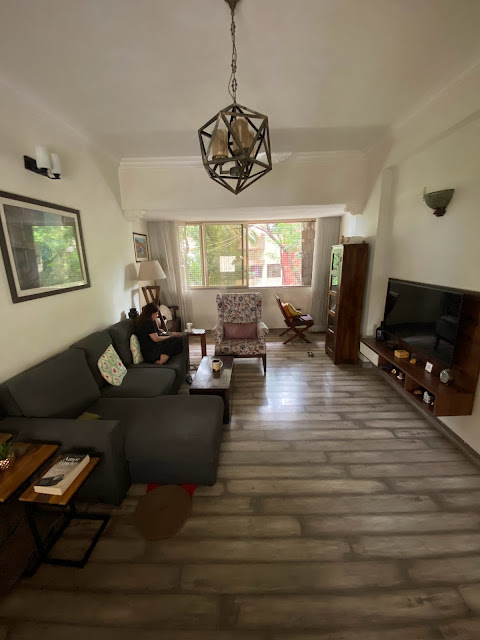 It’s the windows that made me fall in love with the apartment. The drawing room windows to be precise. The one where you can look through the gulmohar trees onto the road below. I could not get that view out of my mind when I first saw it and stuck to my guns about this apartment being the one we will call home, much to K’s frustration, even though the apartment was way above our budget. Then a friend and senior in our Buddhist advised us to go for it and with full confidence. We did. And things magically fell into the place. Including finding Baby Loaf and little Nimki.

I would wake up every morning after we moved in and go to the drawing room window. Listen to the sparrows chirp. Watch the squirrels frolic on the branches of the trees in front. Sip a cup of warm water. Start the day enveloped by a deep sense of gratitude.

I did not give much attention to the window my desk faces back then. It was to my left at the start, with my desk facing the wall instead of the window as it does now. This would help me focus I thought. There was a funny, sloped platform by the window which made no sense to me. You could not keep plants there. Or curios. Not even sit there. Like an appendix with no visible use.

A dear friend and his wife came from Kolkata and stayed with us while he got a bypass surgery done and recuperated before they went back. We had to put two beds in the room so that they would be comfortable. We had kept only one at the start for the sake of space. My mom did complain that this was rather narrow for one person. Two beds made them complete They belonged to K’s grandmom. I needed to shift the direction of my table so that everything could fit. Which is how I came to face the window and not the wall when I sat to write. It seemed as if my world had changed magically. The energy and joy that this infused into my life was indescribable.

Maharani came into my life later that year and our apartment became his too. He would sit on the platform by the window when I wrote at my desk. This was our thing. So did little Nimki after he chose us and our apartment as his own 8 weeks after he was born. He sits by me even if I am working late in the evening and its dark outside. Loaf not so much. If its bright and sunny then Loaf often lolls in the sun in front of me while I write. I could not ask for anything more in life.

I still love our hall window, but the study window is special too. To think that we had not even given the latter a second look for months. Perhaps there’s a moral in that.

Figure it out while I go make lunch.